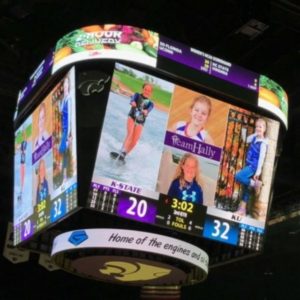 One morning, a woman was curled up on her couch with a soft fur blanket draped over her lap.The only noise was the flicker of the fire dancing beside her.Her neck was bent in prayer and soft tears dripped down her cheeks as she poured out her heart to the Lord. She silently prayed for the Lord to send the snow she hadn’t seen for much of that winter. Her daughter had loved the snow and sledding. Snowball fights had been her all time favorite — but now her daughter was with Jesus. And so the woman prayed for the quiet, soft winter snow to come.

Fast forward to a week later: a snow storm hit Kansas and Missouri like never before. Piles and piles of snow descended over the wheat fields and countryside, so much so that the branches of trees snapped under the weight. What a blessing from the Lord to show His attentiveness in even the smallest detail of our lives. And He sent the refreshing, pure white blanket of snow the day before the Team Hally K-State women’s basketball game.

On the morning of the Team Hally game, two hundred precious friends and family of the Yust family drove to Manhattan, Kansas to attend the fourth annual K-State women’s basketball game in honor of Hally Yust, whose dream it was to play basketball in college.The Yust family greeted everyone as they arrived at Bramlage Coliseum to watch the game. It was such a great time of fellowship (even though K-State lost); the day was filled with the joy of believers gathering together and encouraging one another.

One of the most encouraging aspects of the whole day was when Team Hally members mingled with the players after the game. At the beginning of the basketball season, everyone from Team Hally was given the opportunity to adopt a player from the team to pray for and write letters to. At this post-game event, they were given the chance to meet the players they were praying for every day. The looks on the Lady Wildcats’ faces when they were told that they were being personally prayed for every day was impactful. The power of prayer is real!

Overall, the Team Hally game was a blessed day, and we can already begin praying for the 2020 basketball game!